Guest columnist Clayton Payne describes his transformational experience with the wisdom and connections shared between generations on his 39th Grauer expedition. It all comes down to this—do what you love, with love, because you love it.

During Fall Expeditions week at The Grauer School, all of our students traveled throughout California and around the United States. We're sharing a special moment from our "Portraits of California: Soul Surfing" expedition in this column written by Clayton Payne, Grauer Senior Teacher and Expedition Leader.

The Pacific Ocean is an impish teacher in its indifference. Talk to any surfer long enough and the personification of the briny deep will bear responsibility for all manner of calamity. However, there isn’t blame, per se, but rather a Zen-like resignation to circumstance. In choosing to ride waves, one must learn that there are things beyond our control, there are things one cannot argue with, and there are times when one’s best just isn’t good enough. This is the difficult side of The Grauer School’s Core Value of perseverance, and I learned this surfing. With that, though, I learned the stoke of surfing from my dad. A seemingly inexplicable Quixotic pursuit.

On my 39th ;expedition, legacy and generational wisdom were on my mind. In preparing the Portraits of California: Soul Surfing itinerary, I was cognizant to leaving space for wisdom to be shared; up and down the trip’s 30 year age range. However, I wasn’t sure what shape this wisdom would take. I knew many of the students were better watermen than me, they already knew the stoke. Their parents had seen to that. Further, this was going to be Grauer Surf Coach Daniel Bocater's first expedition. He certainly understood stoke, but would we understand each other? Like I learned from my dad, there is no way to really know how good the surf is unless you paddle out.

So, on Monday morning in a single van, we paddled out together.

And it couldn’t have gone better.

The students were teaching me to see the entirety of life as a surf session. There are things beyond our control, there are things you can’t argue with, where your best just isn’t good enough, but that doesn’t mean you can’t have fun.

Daniel, a better expedition partner I couldn’t ask for, was teaching me a lot about authenticity in the moment.

As such, I had to wonder, was I providing anything?

Sure, we were able to surf some amazing waves together and visit places of worship that provided opportunities for great conversations, where was I in the link between generations?

The answer came on Wednesday. On our drive north, Daniel suggested we visit his father, Davey Miller, in Ventura. Mr. Miller spent the 80s and 90s as a pro surfer, gracing magazine covers and various advertisements for endorsements he earned. However, more than his skill on a board was his depth of expression as an artist and musician.

Graciously opening his art studio/home to us, Mr. Miller shared not only great stories, but, like his son, shared his most authentic self with all of us. As we listened and laughed, I felt a genuine generational connection running through the group; the passing of wisdom. And while the surf stories and art were incredible, the “wisdom surf” clearly picked up listening to him sing/freestyle while playing the most soulful drums.

Then he handed me his sticks and asked me to play.

Feeling like I had just paddled out into surf I had no business being in, I took a deep breath, and surrendered to whatever came out of my hands and feet. Mr. Miller began singing over the top of my playing, and suddenly there we were, locked into an infinite moment. After we played, he then shared a personal story of protest, from during the days of Operation: Desert Storm, and how it inspired him to write a song, “Penguin State of Mind,” which he then delivered a capella.

If you can do that, you'll naturally find spaces for activism, personal growth, professional development, and all the other things we search for.

That’s what stoke is.

That’s what keeps surfers paddling out into an impersonal, frolicsome tumult.

That’s what keeps us going on expeditions.

That’s what I first learned from my dad in the surf. And learned again afoot and afield from school legends like Dr. Stuart Grauer, Don Kish, and Chris Ahrens. And learned again from Daniel, his father, and a group of sea salt-dusted, boisterous students.

It’s what I look forward to learning again in the spring, on my 40th expedition. 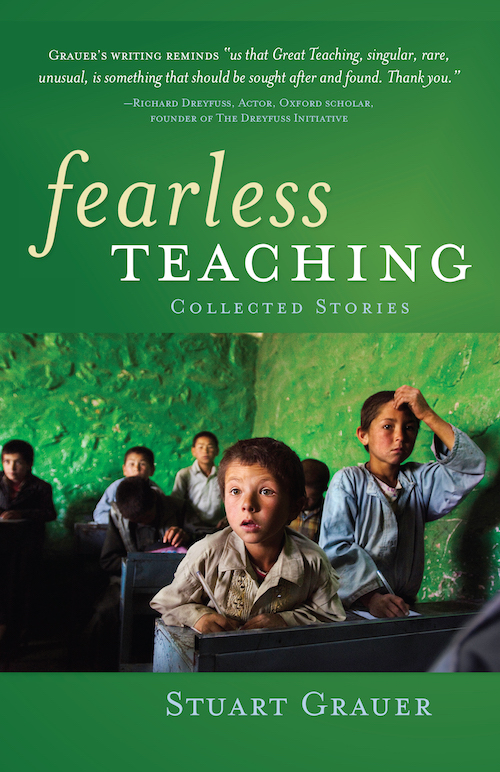 One of the founding principles of The Grauer School is the importance of expeditionary learning, where our students learn important lessons from the natural world. More parents and educators who are now recognizing the value of outdoor education and the essential intelligence it imparts upon our children.

This week's column features guest columnist Trevor Olson, High School Dean at The Grauer School. Trevor shares the wisdom he learned from Jim, a 79-year-old father and grandfather, about the importance of acknowledgment and respect for others.

The level of stress and anxiety that students feel has reached new heights, which impacts their happiness, purpose, focus, honesty, depression rates, and family dynamics. Where does their stress about academic pressure come from? The answer will surprise you.

Propinquity refers to the physical or psychological proximity between people. The Grauer School's campus layout was intentionally set up to foster close propinquity. Our students interact with each other while walking through the central quad, swirling into small gatherings forming like eddies.

The rapidly expanding reach of AI has the potential to reshape many aspects of our lives, including how students create their academic work. Our teachers are grappling with how to know when students submit original work, an issue that will be magnified when AI bots become even more prevalent and their output becomes more difficult to detect.